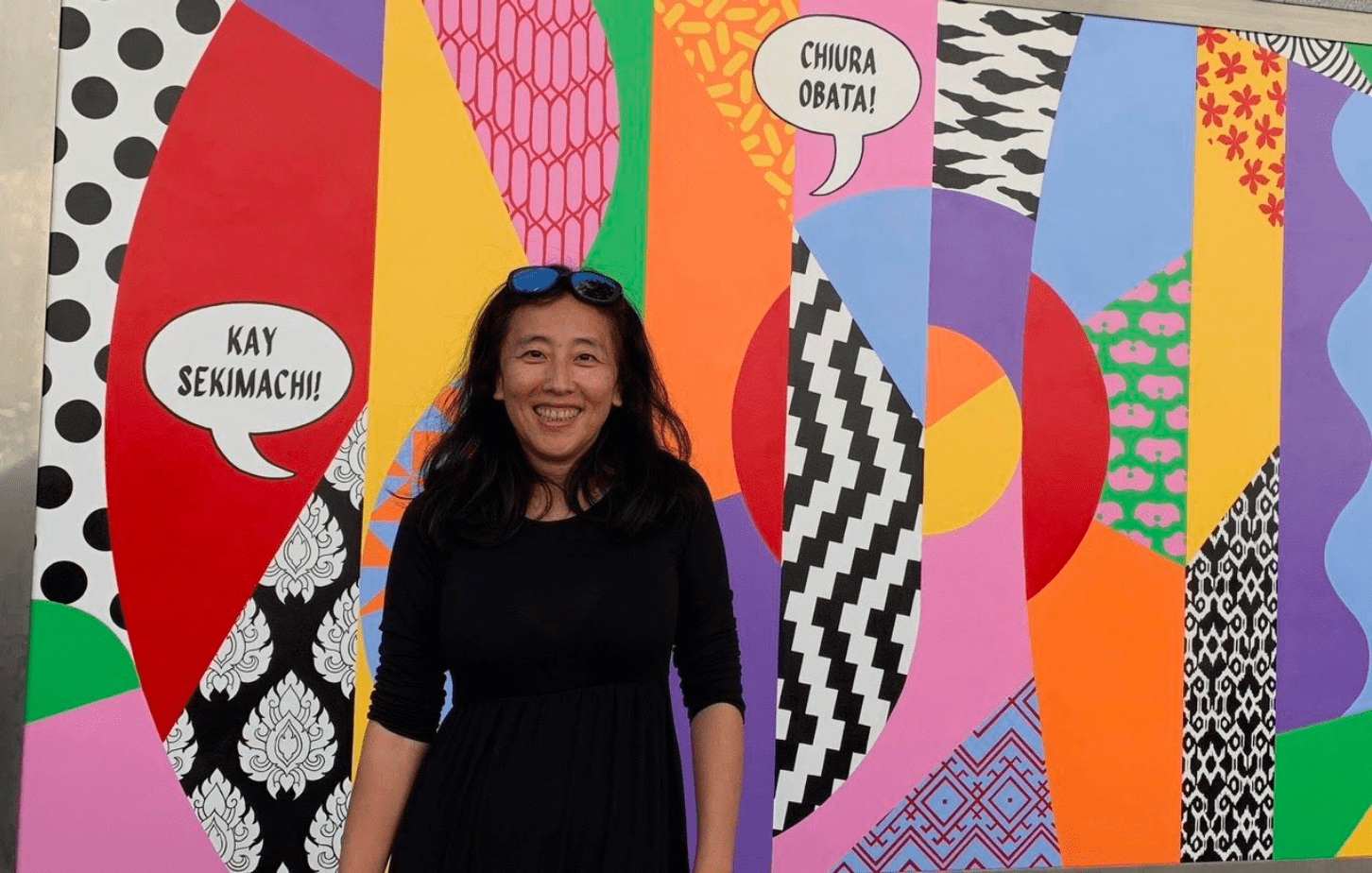 Abby Chen joined the Asian Art Museum of San Francisco (AAMSF) as Senior Associate Curator and the inaugural Head of Contemporary Art in January 2019. From 2006-2018, Abby was the artistic director at the Chinese Culture Center of San Francisco (CCCSF), where her visionary leadership transformed the organization through risk-taking exhibitions and impactful public art. LAAUNCH spoke recently with Abby about her career and vision for Asian American art and artists.

‍1. Can you tell us about your personal and career journey that led you to your current position at AAMSF?

I came to the US from China and started working at Silicon Valley Bank, where I had the opportunity to meet many entrepreneurs. However, what I saw in the American media did not represent me, and I felt very invisible. I began to work as a photographer and gathered other immigrant photographers to form our own organization, the Chinese Artists Network. Soon, we were getting invitations to photo fairs and museums. At that time, CCCSF was looking for someone with a new vision and took a risk to give me the opportunity to create a platform for other contemporary artists. I worked at CCCSF for 12 years and learned about the San Francisco Chinatown community,Asian American history, and getting Asian American art into the public domain. I came to realize the invisibility of Asian American artists in public art spaces, which are highly contested and require tremendous resources. At CCCSF, I learned how to work with communities to raise the profile of Asian American artists in such spaces.

2. For those outside of the Bay Area, can you describe a little about AAMSF, its mission, place in the larger art landscape, and future directions?

AAMSF started in 1966, and its mission is to connect art with life, inspiring new ways of thinking by connecting diverse communities to historical and contemporary Asian art and culture through its world-class collection, exhibitions, and programs. With over 18,000 artworks, AAMSF has one of the largest collections devoted exclusively to Asian art in the world. AAMSF has a strong public engagement component and a broad mandate to provide educational experiences to audiences ranging from school children to adults. Our exhibitions draw a line from our historic collections to contemporary practices, extending narratives from past to present.

With my hiring, AAMSF has made a strong commitment to contemporary art as one of the four pillars of the museum’s ongoing transformation. Our audience continues to expand and is continually changing to a younger, more diverse demographic. The future of connecting art with life for AAMSF will be to help define what it means to be Asian and Asian American and to shift the dominant narratives of the past that have resulted in current Asian American stereotypes.

As we look to the future, I want to go back to the original meaning of “curate,” which comes from the Latin word “curatus” – meaning “to care.” Largely, museums have been known to care for objects, but here at AAMSF, we envision caring for people and practices as well, with a spirit of creativity, imagination, and curiosity. We are moving away from a static perspective of antique Asian objects to a more dynamic interaction that involves story telling of the Asian American experience.

3. Can you talk about some recent Asian American exhibits at AAMSF during COVID-19?

Two Asian American artists that we are currently exhibiting outdoors during the COVID crisis are Chanel Miller and Jenifer K Wofford. Both their works are viewable from Hyde Street behind the museum.

I was, I am, and I will be, the inaugural work in our new Wilbur Gallery, introduces artist Chanel Miller. The artwork represents healing as a process with three distinct yet interchangeable parts: reflecting on the past, being mindful in the present, and envisioning the future.

In this wall mural, playful line-drawn figures illustrate the phrases “I was,” “I am,” and “I will be,” encouraging us to think of life as an endless state of becoming. Visible from outside the museum — day and night — this is one of several public artworks commissioned by AAMSF to engage the surrounding community during COVID. Before the crisis, the idea was to make the artwork visible from the street as a source of warmth and a beacon in the dark. But now with COVID, I think the city needs it even more than ever.

Miller is a Palo Alto–born artist and writer based in San Francisco and New York. She first came into the public eye, anonymously, as “Emily Doe,” the victim of a 2015 Stanford University sexual assault whose powerful impact statement presented in court went viral. Miller relinquished her anonymity and reclaimed her identity in September 2019, when she published the critically acclaimed memoir, “Know My Name.” I was, I am, I will be is Miller’s first commissioned artwork for a museum.

These familiar cartoon graphics give voice to Wofford’s mural, which embeds recognizable Asian decorative patterns within a festive 1980s design vocabulary to celebrate Asian American immigrant histories and cultures. For these patterns, Wofford chose motifs found in works in the museum collection, as well as traditional designs drawn from Asian cultures represented in the surrounding communities.

4. Where is Asian American art in its development?

5. What do you see as the opportunities and challenges for Asian American art in the future?

Asian American artists should have the freedom to create whatever style of art they want, without tokenism or being overly limited by the burden of representation. But at the same time, their upbringings and personal histories as Asian Americans are often embedded in their artwork – sometimes obviously, sometimes not – and deserve to be acknowledged. In her recent article, “​Refusing the Call for Recognition​,” Susette S. Min demonstrates the greater need to engage with Asian American narratives in a nuanced manner that honors their full complexity.

‍6. Who are some of the leading Asian American artists that you believe people should know?

Museums need to restore the “lost” stories of Asian American artists like Bernice Bing, Carlos Villa and others. We need to ask the hard questions, do the research, and celebrate their legacies.

7. What has been the impact of COVID-19 and anti-Asian sentiment on Asian American art and artists?

‍Having already lacked resources before the crisis, artists are really struggling now. Museum closures and reduced funding are making it even more difficult for artists across the board to survive and thrive in this environment. In particular, immigrant and refugee artists are less familiar with the process of getting grants, support, etc., and often have language barrier issues as well. For Asian American artists, there has also historically been less access to opportunity. Anti-Asian sentiment hurts our communities at a time when artists are needed more than ever, as their expression holds the key to our collective dignity. We are lucky to have a museum like AAMSF, but need much more support.

8. What can the Asian American community do to support these artists now?

‍See the exhibitions! Join museums! If you’re a journalist or an editor, write about Asian American art shows! If you’re a TV or radio producer, feature the art and artists on your programs! If you can, buy the art being made now! If you see an article in a newspaper or magazine, read it. Share it with your friends on social media. Write in and say that it was interesting.

Don’t think of support as something separate from your life as you live it. Bring Asian American art into what you’re already doing.

Our Donors
LAAUNCH is a volunteer-based, non-profit organization. Our donors allow LAAUNCH to fund the programs needed to fight anti-Asian racism, increase Asian American representation, and provide the resources needed to create a brighter future.

Wondering how you can support us?
Make a donation
Stay informed
Sign up for our newsletter to stay up to date on LAAUNCH news, events, and actions.
Leading Asian Americans to Unite for Change
We exist to improve the future for Asian Americans.
LAAUNCH is a non-profit organization.
Become a Donor Today
Copyright © 2021 - 2022 LAAUNCH Foundation, all rights reserved.
Our WorkAboutNewsletterResources
FactsPressContact
Find us on social